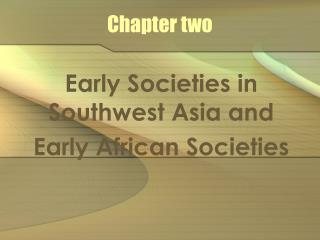 Chapter two. Early Societies in Southwest Asia and Early African Societies. I- The Quest for Order. A. Mesopotamia: the land between the rivers” 1. Valleys of the Tigris and Euphrates. 2. Little rain so area needs irrigation 3. Food supplies increase