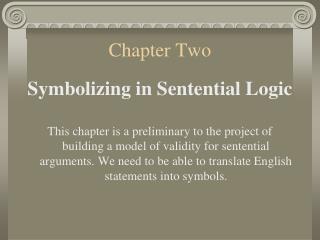 Chapter Two. Symbolizing in Sentential Logic This chapter is a preliminary to the project of building a model of validity for sentential arguments. We need to be able to translate English statements into symbols. The syntax of a language shows how to formulate correct