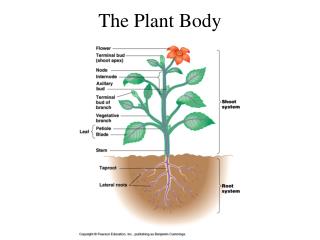 The Plant Body - . fun plant facts. there are over 320,000 species of plant - they differ from each other in light

Plant Structure and Function The Plant Body - . chapter 24. vascular plant tissue includes all of the following except

The origin of the secondary plant body and the periderm - . specimens techniques :3, 7, 8, 9 *bidens pilosa ts stem .

The Plant - . the plant that tea comes from is called camellia sinesis. flowers are white with a buttercup shape and

Redesigning the Body The Body Skinned - . franziska schroeder center for the creative and performing arts (ni) an

The body - Brain. heart. eyes. lungs. the body. if you drink loads of alcohol it can damage your brain your brain works

The Body II – The subjective body - By the end of the 19 th century, some artists were treating the figure in radically