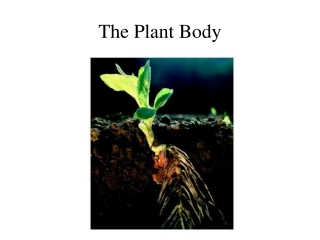 Plant Hormones - . plant hormones. hormone: is a chemical messenger produced in one part of the body that affects

Topic 1: It’s My Body - . cells and body systems of human. whose cell is it anyway?. how is the body organized?. each

Plant Responses - . plant hormones. hormones are chemical messengers that coordinate the different parts of a

Chapter 29 Plant Tissue - . overview of the plant body. although no one species of the 295,000 species of plants can be

Plant project - . due may 16, 2014. plant project. the following items have to be turned in together : cover page

Water makes up ~95% of a plant’s volume, and in non-woody tissues, 99%. Water is important for: - Dissolving and