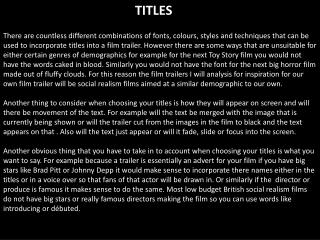 Titles in Titles - . mla style 2. common examples. there are four common ways in which a title might appear in another

Titles - . variant methods. referring to titles. titles are either italicized ( underlined ) or placed between

Titles - . how to display titles properly… and look good while doing it! hsa/grammar skills. to begin with…. when

Titles - . http ://www.mrshatzi.com/files/punctuating-titles.pdf. in print, titles of longer works are italicized, or

Academic titles - . what’s what and who’s who. basics. higher education is what happens after high school 2 levels of

Possible titles - Good grade guru. you me at college. possible titles. surviving it!. all time college . the brick

Punctuating Titles - . the 2 ways to punctuate titles: italicize or underline use “quotation marks”. use italics or

Punctuating Titles - . title , title or “title”. punctuating titles. the title of a written works are punctuated in

Titles/ authors - . discussion leader example. title of essay. include a subtitle that b riefly s ummarizes the m ain

Punctuating Titles - . when do i underline or italicize?. titles of books titles of magazines titles of newspapers titles