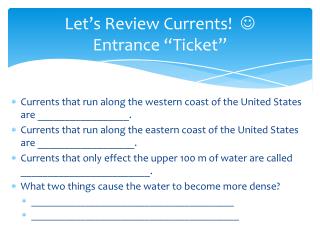 Entrance/Exit Ticket Assignments - . this is a collection of the entrance/exit ticket assignments that were collected for

Entrance Ticket #1 (Chapters 1-4) - . list 5 things thomas has learned about living in the glade. which one of these

Entrance Ticket - . a student was absent yesterday in 7th period. what would you tell him/her about the mughal empire. be

Entrance Ticket - . do you believe in “predestination” -- or what some people call -- “fate”? why or why not? if