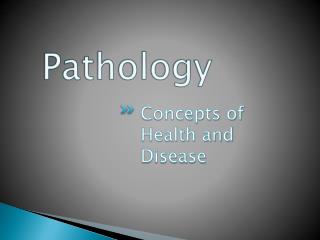 Pathology. Concepts of Health and Disease. Health and Society. Prehistoric Times Angry god or evil spirits caused illness The gods needed to be pacified to obtain a cure Evil spirits driven out Communities helped to secure health of its members Health practices were based on belief systems Pathology - . - the scotland/malawi link. the scottish parliament. a devolved administration within the uk first minister

Pathology - . what will we study??. how and why people get sick steps for diagnosing an infection applying vitals

Pathology - Is the study of the causes and effects of an injury or disease. when used in the context of medical

Pathology - . introduction to course alan stevens jim lowe. what is pathology?. pathology is the study of patterns,

Pathology - . what is pathology? . pathology is the study and diagnosis of diseases in living things by examining

Pathology - . what is it?. what is the problem?. the hypothesized cause the biology the symptom the sign the

pathology - . * recognition(identify) : emphysema * what you should know about it : - widened air spaces. - ruptured and

Pathology - . study of functional and morphological alterations that develop in an organism as a result of injurious