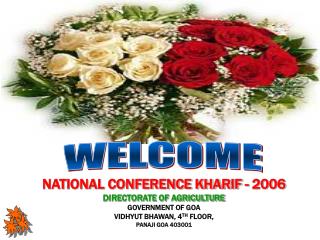 NATIONAL CONFERENCE ON AGRICULTURE FOR KHARIF CAMPAIGN 2006 - . presentation by department of agriculture state :

Restaurants of Goa - Goan cuisine is famous all over the world. some of the most famous restaurants in goa are blue bird,