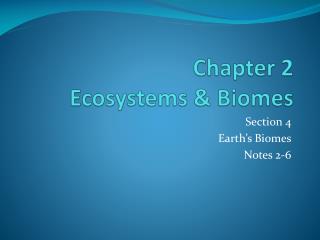 Chapter 2 Ecosystems & Biomes. Section 4 Earth’s Biomes Notes 2-6 . Mountains and Ice. Those places that don’t fall into other land biomes can be placed in one of the following biomes. Mountains: Climate conditions change from the base to the summit of a mountain

BIOMES CONTAIN MANY ECOSYSTEMS - . regions of earth are classified into biomes biome=large geographic areas that are

BIOMES AND ECOSYSTEMS - . what is a biome? . a biome is a group of land ecosystems with similar climates and organisms.

Ecosystems and Biomes - . energy flow in ecosystems. where do you get your food?. producers – an organism that can make

Ecosystems and Biomes - . chapter 2 review. eats other organisms . consumers. if a fox eats a bunny, and the bunny eats

Biomes and Ecosystems - . human impact and earth systems. review. we have studied how the main elements of life (c, n, o,