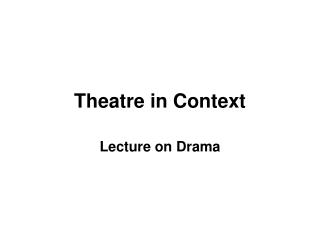 Mask in Theatre - . masakhaمَسَخَ be transfomed. put on a mask and anything is possible. suddenly you can move,

Math in Theatre - . applications of conics to the building of amphitheaters; and theatrical performances that use math.

Context Clues Vocabulary in Context - . how to hunt down the meaning of a word by using the clues around it. created by: