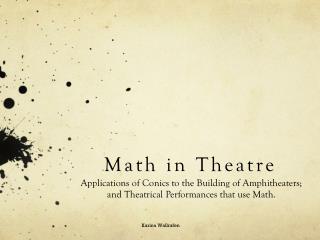 Math in Theatre. Applications of Conics to the Building of Amphitheaters; and Theatrical Performances that use Math. What exactly is an ellipse?. The textbook definition: the set of all points for which the sum of their distances to two fixed points, known as the foci, is constant. Mask in Theatre - . masakhaمَسَخَ be transfomed. put on a mask and anything is possible. suddenly you can move,