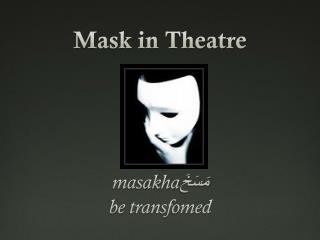 Mask in Theatre. masakhaمَسَخَ be transfomed. Put on a mask and anything is possible. Suddenly you can move, act, and think differently. The mask embodies the potential for transformation of all kinds - emotional, spiritual, physical, and symbolic. Greek Italian Japan Korean Math in Theatre - . applications of conics to the building of amphitheaters; and theatrical performances that use math.

Symbolism in mask making - . symbolism. something used for or regarded as representing something else; a material