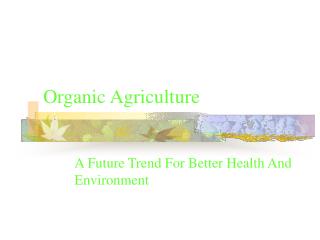 Organic Agriculture. A Future Trend For Better Health And Environment. “The birthright of all living things is health. This law is true for soil, plant, animal and man: the health of these four is one connected chain. Any weakness or defect in the health of any earlier link is passed Organic agriculture - . bulgarian team. land use . over 25.6 hectares of the territory of bulgaria, or about 3 % of

Organic Agriculture Worldwide - . graphs from the 2009 edition of ‚the world of organic agriculture‘ helga willer,