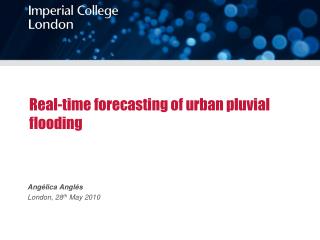 Real-time forecasting of urban pluvial flooding. Angélica Anglés London, 28 th May 2010. Introduction. Due to insufficient capacity of the sewer systems during heavy storms, prevention of flooding has become an important issue. [Report] Real-Time Marketing: The Agility to Leverage 'Now' by Rebecca Lieb - Digital channels are 'on' 24/7, a fact

Causal Forecasting - . by gordon lloyd. what will be covered?. what is forecasting? methods of forecasting what is causal

Introduction to real-time systems - . ci346. what does ‘real time’ mean?. all computer systems model some aspect of

FreeRTOS - . introduction to multitasking in small embedded systems. most embedded real-time applications include a mix

“RUBANISATION” by Tay Kheng Soon It is neither the Urban nor the Rural, it is both. New architecture cannot come

Forecasting Basic Concepts And Stationary Models - . what is forecasting?. forecasting is the process of predicting the