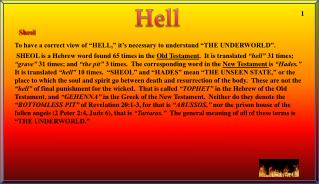 Hell. 1. Sheol. To have a correct view of “HELL,” it’s necessary to understand “THE UNDERWORLD”. Hell - . why talk about it in a ‘reasonable’

Hangover Hell - . by: names of team members. introduction. chemistry of a hangover ways to prevent a hangover what you

Hell Fire - . a biblical defense of a loving god and eternal hell. hell and modern culture. surveys show that many people

Gracious Hell - Supplant your own one of a kind unclean word for "damnation!" and furthermore you perceive this

Love in Hell - . michael mcclellan. quest. the heart of confusion. not much is known about this precious object.

What about hell? - . the trouble with terminology and tradition scripture uses a number of different terms that have been