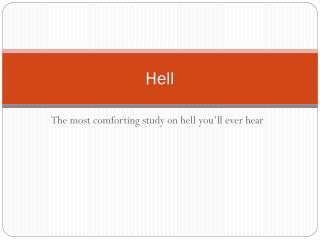 What can we work out about medieval life from the Doom paintings that survive in churches today? - . medieval church-hell

VSEPR THEORY: - . how do we determine the shapes of molecules and ions?. vsepr theory. what does vsepr stand for? v

Chapter 3 Settling the Northern Colonies - . separatists. vs. puritans. puritanism. calvinism – institutes of the

Rhetorical Devices in Literature and Media - . a presentation by alexis wells, caleb middleton, emma brick-hezeau, and

Bubbly Advice - For the creative business person in 2006 tell them where to go…. if someone tells you that you’re

VSEPR Theory and Valence bond theory - . learning outcomes at the end of this presentation the students will be able to:

The Doctrine of the Annihilation of the Wicked - . pastor rex deckard calvary apostolic church. where do the wicked spend

A History of Hell - . by ralph monday world literature i. the judeo-christian