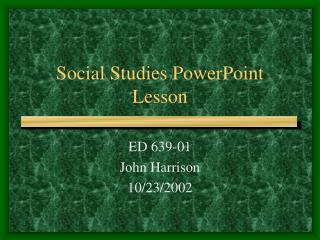 Social Studies PowerPoint Chapter 2 - . by : sam nelson. hunters and gathers. in the stone age the men would be hunters

Social Studies 10 Lesson 3 - . treaty of versailles. do now. answer the following on a piece of paper: did drawing

Social Studies Unit 3 Lesson 4 - . progress as a state. what are we going to learn?. how did the issue of slavery