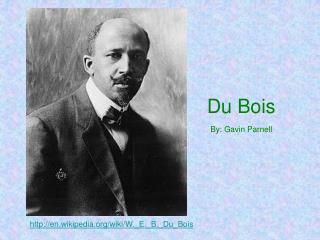 Du Bois. By: Gavin Parnell. http://en.wikipedia.org/wiki/W._E._B._Du_Bois. Introduction. Du Bois was a great man. He started the NAACP and edited it’s magazine, “The Crisis”. He wanted blacks to be equal with whites. He made 16 research monographs on blacks. W.E.B. Du Bois - . william edward burghardt du bois. history. he was born in 1868 in massachusetts to a free father and

W.E.B. Du Bois - . the souls of black folk (1903). significance of the work. historical – for exposing intellectual and

WEB Du Bois - . 5.04 compare and contrast the african american political and legal personalities of the time period and

Washington and Du Bois - . african americans were ignored by the mainstream of the progressive movement, including by the

Democracy Deferred : W.E.B. Du Bois - . “i sit with shakespeare and he flinches not” (political science 565).

Democracy Deferred : W.E.B. Du Bois - . “i sit with shakespeare and he flinches not” (political science 565). grades.