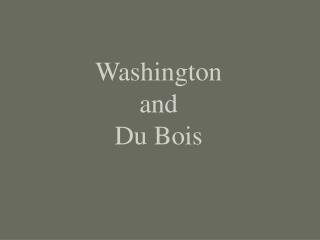 Washington and Du Bois. African Americans were ignored by the mainstream of the Progressive Movement, including by the Progressive Presidents Pres. TR - "Now as to the Negroes … I entirely agree that as a race and in the mass, they are altogether inferior to whites“ Booker T. Washington and W.E.B. Du Bois - . differing ideas on how blacks could best achieve full equality and on african

Booker T. Washington &amp; W.E.B. Du Bois - . born into slavery, to a slave mother and a white father. educated at

W.E.B. Du Bois - . william edward burghardt du bois. history. he was born in 1868 in massachusetts to a free father and

W.E.B. Du Bois - . the souls of black folk (1903). significance of the work. historical – for exposing intellectual and

WEB Du Bois - . 5.04 compare and contrast the african american political and legal personalities of the time period and