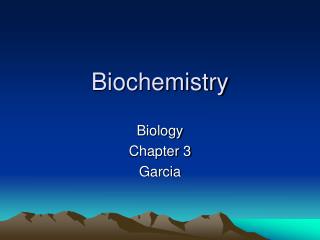 5. Stereochemistry - . why this chapter?. handedness is important in organic and biochemistry molecular handedness makes

Biochemistry of Cells - . americans consume an average of 140 pounds of sugar per person per year. uses of organic

Ch. 22- Organic Reactions and Biochemistry - . saponification. process of making soap soap is the metallic salt of a