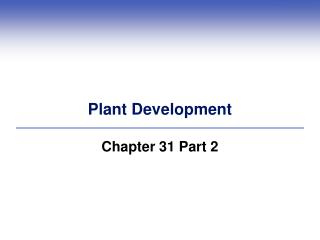 Plant Development. Chapter 31 Part 2. 31.4 Adjusting the Direction and Rates of Growth. Tropisms Plants adjust the direction and rate of growth in response to environmental stimuli such as gravity, light, contact, and mechanical stress Hormones are typically part of this effect. Plant Growth and Development II - . &quot;it is at the edge of a petal that love awaits.” ...william carlos

Regulation of Plant Growth - . interacting factors in plant development. the development of a plant is regulated by four

Plant - . you’ll leaf this knowing more!. form and function. a presentation of chapters 35 – 39 by clarence lewis,

Plant Form and Function - . chapter 35 structure, growth, and development. the plant body has a hierarchy of organs,