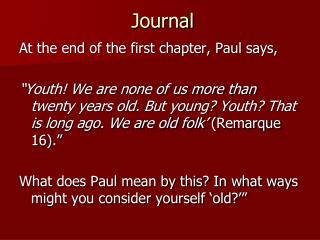 Journal. At the end of the first chapter, Paul says, “Youth! We are none of us more than twenty years old. But young? Youth? That is long ago. We are old folk’ (Remarque 16).” What does Paul mean by this? In what ways might you consider yourself ‘old?’” . Journal.

Journal of the Day - . why is it important to know who is in your country? (8 sent). population &amp; urbanization.

Argument - . lesson 1: everything’s an argument. in your journal:. respond to this prompt as your next journal entry:

ENVM 7015 a) Importance of peer-reviewed journal articles b) Application of statistics in research - . types of journal

How to review a paper for a journal - . dr stephanie dancer editor journal of hospital infection. what is peer

Intrapersonal Interventions - . ways to lower your stress level without need to involve others. eliminate as many

Journal Club - How to use and article about a diagnostic test satyen gada, md lt mc (fs) usn ncc pediatric

Journal - . what were the four main causes of wwi?. on a clean page: swabat!. identify the countries that fought for the