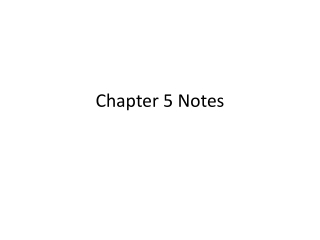 Chapter 5 Notes. 5.1 – Perpendiculars and Bisectors. A perpendicular bisector of a segment is a line or ray that is perpendicular to the segment at the midpoint. D. A. C. B. Chapter 9 Lecture Notes - . an introduction to inductive arguments. chapter 9. induction is the basis for our commonsense

Chapter 3 Notes - . nile civilizations. chapter 3 notes. egyptian civilization developed along the nile , as did other

Chapter 9: Revolution Begins! - . your chance to make your own set of notes, but with my instructions!. each of you will

Review for Chapter 5 - . passing through the great basin. this is a no gum class. please dispose of it properly!. bell

Chapter One Notes - . exploration and colonization. what is the joke?. native americans. earliest settlers came over

Chapter 2.4 Notes: Use Postulates and Diagrams - Goal: you will use postulates involving points, lines, and planes.