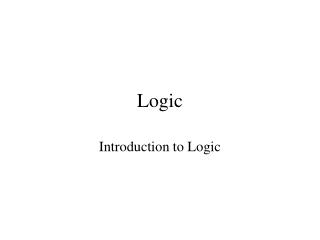 Logic. Introduction to Logic. What is logic?. Logic is the study of valid reasoning. That is, logic tries to establish criteria to decide whether some piece of reasoning is valid or invalid. OK, so then what do we mean by ‘valid reasoning’?. Reasoning.