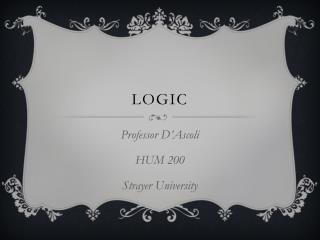 Logic. Professor D’Ascoli HUM 200 Strayer University. What is logical?. LOGIC. WHAT IS LOGIC? Lewis Carroll, Through the Looking Glass : “Contrariwise, continued Tweedledee , if it was so, it might be; and if it were so, it would be; but as it isn’t, it ain’t . That’s logic .".