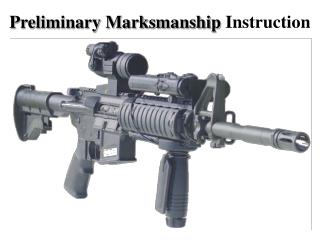 Preliminary Marksmanship Instruction. M4 RIFLE SYSTEM. Consists of a Rifle, a Magazine, and a Sling. It Is a Lightweight, Gas Operated, Air-Cooled, Magazine Fed Shoulder Fired Weapon That Can Be Fired Either in Semi-Automatic or Three Round Bursts. M4 SPECIFICATIONS. MARKSMANSHIP PRINCIPLES - . previous page. home page. help. next page. “ you have been trained to take your place as a

Spiritual Marksmanship - . “folks who make up god as they go…” “america is headed for 310 million people with 310

BASIC RIFLE MARKSMANSHIP - . one shot. m16a2 rifle system. consists of a rifle, a magazine, and a sling. it is a

M16A2 Basic Rifle Marksmanship - . parts of m16a2. as part of mechanical training, soldiers must be taught and must