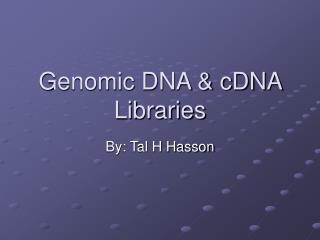 Genomic DNA & cDNA Libraries. By: Tal H Hasson. Introduction. The use of genetic information is a powerful tool that today is becoming more readily available to scientists. Valuing Libraries: Demonstrating Your Library’s Impact on Your Community - The new jersey state library &amp; the

Fostering a Culture of Research and Publication in Academic Libraries - . catherine sassen and diane wahl university of

Libraries Online: At the Centre of Everything Good - . your presenter: peter atkinson. evolution of the web. web 1.0 was