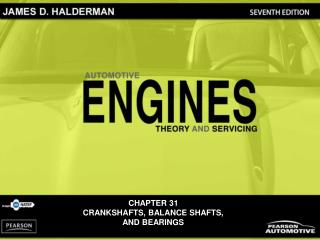 CHAPTER 31 CRANKSHAFTS, BALANCE SHAFTS, AND BEARINGS. OBJECTIVES. After studying Chapter 31, the reader should be able to: Prepare for ASE Engine Repair (A1) certification test content area “C” (Engine Block Diagnosis and Repair). Describe the purpose and function of a crankshaft. Chapter 11: Shafts - . when a man has a vision, he cannot obtain the power from that vision until he has performed it on

Shafts and Axels - . shaft is a rotating member and it provides axis of rotation for gears, pulley, flywheels, cranks,

Chapter 12 Deflection of beams and shafts - . the elastic curve (section 12.1) slope and displacement by integration

CHAPTER 14 Wheel Bearings and Service - . objectives. after studying chapter 14, the reader will be able to: prepare for

Chapter 12: Hydrodynamic and Hydrostatic Bearings - . getting wisdom is the most important thing you can do! and whatever

Chapter 12 Deflection of Beams and Shafts - . elastic curve. the deflection diagram of the longitudinal axis that passes

Bearings and direction - All bearings have three digits. if the angle is less than 100°, place a 0 in front of the

Bearings and Navigation - . i. using angled vectors (put calculator in degree mode). a) the vector must be in

BEARINGS - . this presentation accompanies the worksheet: “ scale drawings and bearings ” available at:

Bearings - . learning intentions to understand what a bearing is to be able to work out and measure bearings . success

Bearings - . rolling contact bearings – load is transferred through rolling elements such as balls, straight and