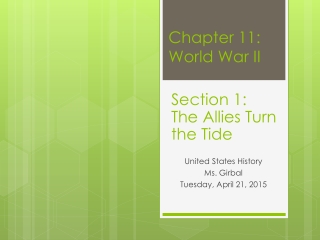 Section 1: The Allies Turn the Tide. Chapter 11: World War II. United States History Ms. Girbal Tuesday, April 21, 2015. Warm-up (4-21-15). During WWII, the Allies agreed to a “ Europe First ” strategy to defeat Hitler. What does this mean? Germany was the most dangerous enemy Chapter 12 – World War II - . #6 impact of wwii. essential question : what was the impact of world war ii on the united

A World Without Borders Chapter 40 - . before we get started:. this is it! you have reached the end of the text! the ap

BNW Chapter 17 - . the chapter on philosophy. john’s argument about this world. john argues that to lose intelligence

Chapter 27: World War I - . world war i begins. causes of world war i. nationalism idea that your country’s interest

Chapter 8 - . imperialist policies and practices. the last chapter was the rise of imperialism in our world. in this

Chapter 30 A Second Global Conflict and the End of the European World Order - . by: samantha schultz and renata narvaez.

Unit 1: The World Chapter 2: The Physical World - . our solar system. sun and the objects that revolve around it center

Chapter 16 – The World Economy - . the americas and other world areas were joined to the world network, while older

Before Chapter 3… Chapter 2 (a bit more) - . norman’s seven stages of of action form the goal form the intention

Chapter 15 The First World War - . how and why were canada and newfoundland involved in the first world war?. before the