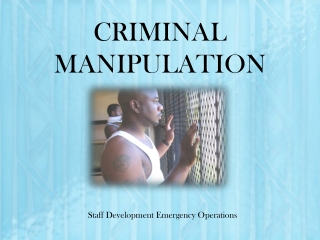 CRIMINAL MANIPULATION. Staff Development Emergency Operations. Performance Objectives. Explain the 5 step process in the law enforcement continuum that offenders expect staff to follow when they violate the rules Identify the 5 characteristics offenders use to profile victims. Manipulation - . toby walsh nicta and unsw. manipulation. constructive can we change result so a given candidate

Manipulation - . bob carroll, marlee cooper, and matt smederovac. everything we see, hear, or read in the media is

Text Manipulation - . these slides are a combination of deb’s, duncan’s and mark’s materials . why teach it?.

Genetic Manipulation - . gmo foods: should we grow them?. prior to class. take a look at the following online discussion

String Manipulation - . students should fill out string worksheet along with this. students can use worksheet on test.

Image manipulation - . the «  seashore  » project. what is seashore ?. seashore is an open source image editor for

Photo Manipulation - . image one. image two. image three. image four. photo manipulation. it is critical for you to use