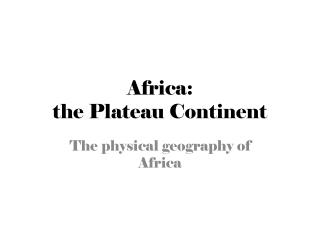 THE SEVEN CONTINENTS AFRICA Africa is the second largest continent. - The south pole is located on antartica. few people

ILLUMINATING THE DARK CONTINENT: UNDERSTANDING AFRICA THROUGH PHOTOGRAPHS - When you think of africa, what images come

AFRICA – A Diverse Continent - . 30 million square kilometres of land – what is it like?? as you travel east to west

Africa SS7G2 – discuss environmental issues across the continent of Africa - . 38. what is one of the major problems

THE PENINSULAR PLATEAU - . a body or piece of land enclosed on three sides by water, jutting out from a larger body of

The Colorado Plateau - . by ryan. how it began. the sauk transgression in the cambrian regression during the ordovician,

Plateau - . plateau: a land area having a relatively level surface considerably raised above adjoining land on