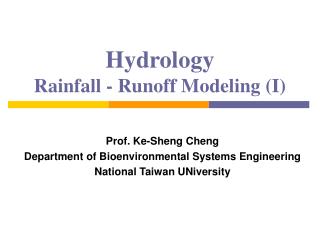 Soil Conservation Service Runoff Equation - . where q = runoff (in.) p = rainfall (in.) i a = initial abstraction (in.) s

Rainfall Measurement - . agriculture – what to plant in certain areas, where and when to plant, when to harvest.

Excess Rainfall - . reading for today’s material: sections 5.3-5.8. excess rainfall . rainfall that is neither