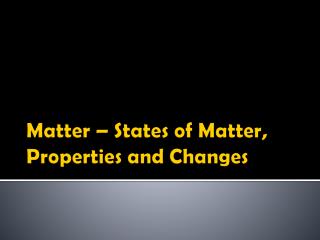 Matter – States of Matter, Properties and Changes. Matter. Matter takes up space and has mass Matter is made of atoms, usually chemically bonded into molecules Exists in different states. States of Matter. There are 4 states of matter: solid, liquid, gas, and plasma

Energy and States of Matter - . energy. when particles collide, energy is transferred from one particle to another. law

Atomic Structure - . atomic structure. all matter is composed of atoms . understanding the structure of atoms i s

Properties of Matter Objective 4 – Changes in Matter - . a puddle of water evaporating rust flaking off a metal fence

States of Matter - . solids, liquids, gases, plasma, and phase changes. is there any movement within the structure of a