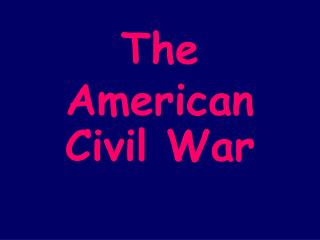 The American Civil War. What was it?. Military conflict between United States of America Confederate States of America War Between the States War for Southern Independence War of Northern Aggression. Causes. Issue of Slavery King Cotton in South 57% of US exports The American Revolution - . kings mountain and cowpens as microcosm. the plan . dis -spell many myths of the war tactics,