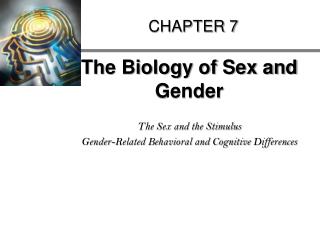 CHAPTER 7. The Biology of Sex and Gender The Sex and the Stimulus Gender-Related Behavioral and Cognitive Differences. Choosing mate by scent?. Each animal has unique genetically determined odor Mothers/babies identify one another from birth Families can identify eachother’s smell