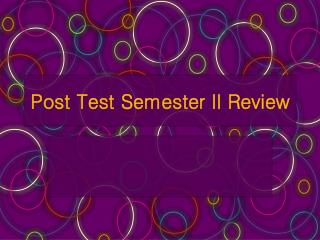 Post Test Semester II Review. Question. Acid Rain is a form of what kind of weathering?. Answer. Chemical. Question. If the average temperature rose 10 degrees, what form of water would be effected the most?. Answer. Ice. Question.

Chemistry II Test Review - . 1). what are the five “evidences of a chemical reaction? give an example of each. color

Review Sheet for POST TEST - . 1. what is the difference between an element and a

Post test Review - . you are almost done……. the amount remaining after the value of all liabilities is subtracted

Review For Test II - . honors alg ii fall 2013. the rules. a question will be put on the board. each group member should

Post Test Review - . sentence types . sentence, run-on, or fragment they are very happy. because we can. please do your