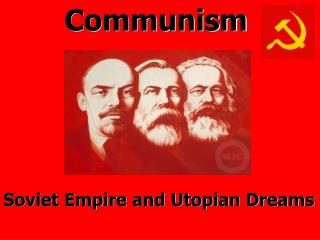 Communism. Soviet Empire and Utopian Dreams. The History of Communism was defined by the interests, needs and goals of the Soviet Union for most of the 20th Century. 1917. 1991. Soviet Union. Russian Revolution. Fall of USSR. 1848. 2007. Communist Movement. Communism - . what is communism?. a government system in which all property is community property. everyone works. the

Communism - . definition of communism. a political or economic system in which the major resources and means of