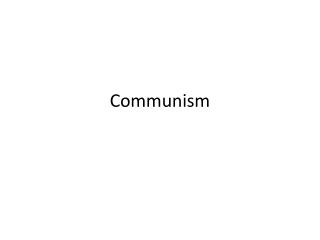 Communism. What Is Communism?. A government system in which all property is community property. Everyone works. The government provides food, housing, healthcare, etc., but little to no wages. No one owns land, houses, etc. . Red Scare. Cold War began after WWII Communism - . soviet empire and utopian dreams. the history of communism was defined by the interests, needs and goals of

Communism - . definition of communism. a political or economic system in which the major resources and means of