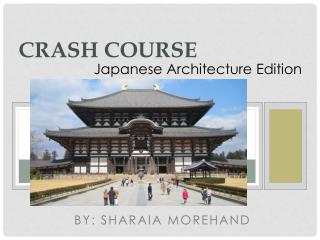 Japanese Architecture Edition. Crash Course. By: Sharaia Morehand. What is “Architecture”?. -The art or practice of designing and constructing buildings. -The complex or carefully designed structure of something. Early Japan. Crash Course! - . king of the geeks!. the southern colonies. 17 th and 18 th centuries. general characteristics of the

Company Crash Course - . presented by women in electrical and computer engineering. purpose for this p resentation.

Grammar Crash Course!! - . buckle up!. focus of today’s grammar crash course:. what is grammar? the 8 parts of

Crash Course Review - . unit xi – testing and individual differences. i. theories of intelligence. a. what is