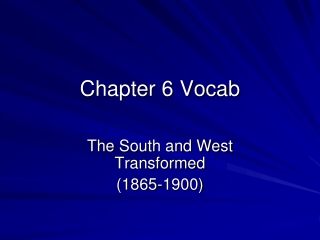 Chapter 6 Vocab. The South and West Transformed (1865-1900). Reservations. Specific areas set aside by the government for the Indians’ use. Native Americans were FORCED to move onto these specific reservations. 2 nd Trail of Tears. Sand Creek Massacre. Vocab review2 - . chapter 1 and 2. we were complacent with our grades even though we barely had a 2.0. my dog cowers in

Chapter 7, Vocab 2 and verbs - . spanish 1. quizlet chapter 7.2 vocab review you should do a flashcard and learn and test

Review Vocab - Fall of rome chapter 14. review vocab. who was the leader of the huns who led invasions of constantinople,

We All Fall Down - . vocab 2. directions. copy the definitions to each word create study aids like flashcards or do vocab

Chapter 4 Content Vocab Section 1&amp;2 - . 1)civil liberties- the freedom we have to think and act to government.

Review Vocab - . china chapter 7. what is a hard gemstone often used in chinese jewelry?. jade . what is a soft, light,

Chapter 12 Vocab not in glossary - . nucleosome – beadlike structure formed by coiling dna around histone proteins that

WWII cover page and vocab (do this after the test) - . using the pictures from chapter 23 &amp; 24, create a cover