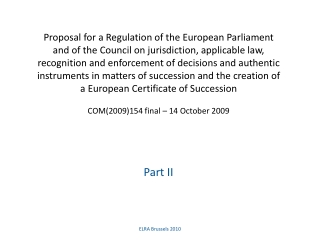 Proposal for a Regulation of the European Parliament and of the Council on jurisdiction, applicable law, recognition and enforcement of decisions and authentic instruments in matters of succession and the creation of a European Certificate of Succession COM(2009)154 final – 14 October 2009. Lesson 7A - . using camera views. welcome to part 2 of the princess &amp; dragon tutorial. in part 1 we covered how