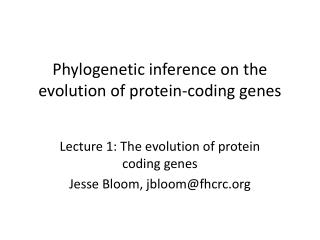 Phylogenetic inference on the evolution of protein-coding genes Phylogenetic inference on the evolution of protein-coding genes

Evolutionary Biology Concepts - . evolutionary biology “what is behind is not important!”- or is it? phylogenetic

Genome Trees and the Nature of Genome Evolution - Berend snel, martijn a. huynen and bas e. dutilh presented by audrey no

Evolutionary Biology Concepts - . “what is behind is not important!”- or is it? molecular evolution phylogenetic

Phylogenetics - . “the time will come, i believe, though i shall not live to see it, when we shall have fairly true

What skills should we be focusing on? What do the skills look like? - Netley abbey’s reading café!. today’s slides

Phylogenetic Analysis - . subroutine. some code needs to be reused a good way to organize code called “function” in