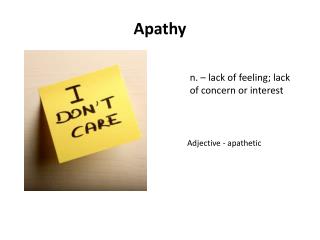 Apathy. n. – lack of feeling; lack of concern or interest. Adjective - apathetic. Assent. v. – to agree to something n. – agreement. Empathy. n. – an identification with and understanding of other people’s feelings and situations. Adjective – empathetic or empathic Verb - empathize. APATHY - . perhaps it was due to apathy that she thought the class was boring. (noun) -complete lack of emotion or

Bystander Apathy - . what is it and why does it happen?. what is bystander apathy?. apathy - a lack of emotion or

Voter Apathy - Create a mind-map that illustrates the reasons why citizens are disillusioned with voting. voter

APATHY IS BORING! - . why other teens say you should give a hoot. what is apathy?. 1. absence or suppression of passion,

Ignorance And Apathy - . ignorance and apathy. hosea 4:6 my people are destroyed for lack of knowledge . because you have

Got Apathy? It’s All Perception - . presented by butch oxendine executive director, asga. is there “apathy” at

“The Danger of Apathy” - . “apathy”. apathy may be a problem that we are struggling with. “apathy” is

The dangers of social apathy - . patricia silva truman high school. “the opposite of love is not hate, it's

Vanquishing Fear and Apathy through e-Inclusion - . what is verve? . verve is a research initiative of computer

The Middle Classes: urban poverty and apathy in Mumbai - . responsible development in a polycentric world inequality,