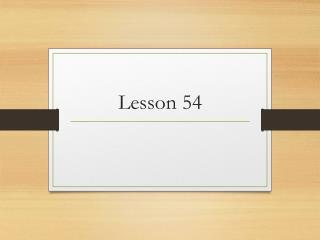 Lesson 54 - Coming of age is a very young person's transition from childhood to adulthood. . lesson 54. turn in short

Isaiah 54 - . 1 “sing, o barren woman, you who never bore a child; burst into song, shout for joy, you who were never

Chapter 54 - Ecosystem ecology. chapter 54. ecosystem – all the organisms living in a community, plus all the abiotic

English Language Arts Level 8 Lesson 54 Mrs. Morrisey - . grammar grabber. not only was rumi a great poet he was also a