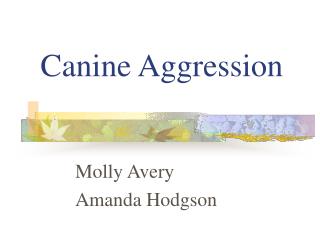 How To Read Your Dog's Body Language - Humans can communicate what is going on with them, and dogs can, too. the

Dog Bite Safety Tips - Any dog of any breed has the potential to bite. dog bites are a largely preventable public health

Obedience training for dogs and puppies

Aggression - 11. aggression. what is the nature of aggression?. aggression is behavior that intends to harm another

The Learned Dog - . class 2: dog training through the centuries. a couple of quick things. details on open-book/take-home

Aggression - . social influence of social psychology. in psychology, aggression is defined as any physical or verbal

Keeping our Dogs Healthy - . healthy dogs. sick dogs. what are we going to talk about?. basic health care food water

AGGRESSION - . aggression. any form of behavior that is intended to harm or injure some person, oneself, or an object.