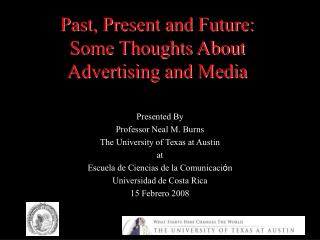 Interest Groups Past and Present: The “Mischiefs of Faction” - . a nation of interests the founders of the republic

Advertising - . advertising is the nonpersonal communication of information usually paid for and usually persuasive in

History of education as a discipline - . study of how education developed over time the past has profound effect on all