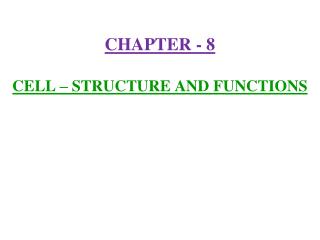 CHAPTER - 8 CELL – STRUCTURE AND FUNCTIONS. 1) Discovery of the cell. Chapter 4: Cell Structure and Function - . practice test answers. the combination of what features would be found in a

Cell Review/Chapter 3 - . by becky . cytology is the study of the structure and functions of cells. the cell was first

Prokaryotic Cell Structure - . a. generalized structure 1. cell appendages a) flagella 1) functions in movement of the

Lesson Overview - . 12.2 the structure of dna. think about it. the dna molecule must somehow specify how to assemble

Cell Organelles - . an organelle is a membrane-bound structure that carries out specific activities for the cell. common

Cell Structure &amp; Function - . http://koning.ecsu.ctstateu.edu/cell/cell.html. definition of cell. a cell is the