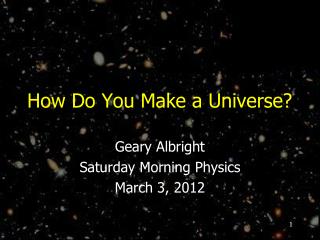 How Do You Make a Universe?. Geary Albright Saturday Morning Physics March 3, 2012. The history of the Universe can be summed up like this: Hydrogen is a light, odorless, colorless gas, that if given enough time, turns into people. Measuring the Universe: Earth - Eratosthenes (about 200 bc): sun overhead at syene on summer solstice sun 7 º from

Which of the following people did NOT accept a heliocentric model for the universe? - . kepler copernicus tycho galileo

Chapter 18 Our Expanding Universe - . chapter 18 makes the “grand leap” to the universe as a whole, and introduces

What is our universe made of ? - . fire , air, water, soil !. quintessence !. dark energy dominates the universe. energy

LIVE INTERACTIVE LEARNING @ YOUR DESKTOP - . nasa/nsta web seminar series how telescopes have changed our view of the

Observing the Universe for Yourself - . patterns in the night sky. our goals for learning:. what does the universe look

The Scientific Method - . 1. observe some aspect of the universe. 2. invent a tentative description, called a

Big Bang Theory - . origins of the universe. a-b-c. which of the following are used as evidence for big bang theory?

The Law of Conservation of Energy - . energy cannot be created or destroyed; it may be transformed from one form into