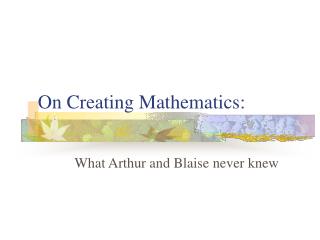 On Creating Mathematics:. What Arthur and Blaise never knew. Informal questions for Mathematicians at parties:. What was the title of your dissertation? (snicker-snicker) What was your research?… (i.e., What is left to study in mathematics? A new way to add or multiply? On Creating Mathematics: - . what arthur and blaise never knew. informal questions for mathematicians at parties:. what

CreatIng A Mathematics Culture - . whangarei•may 6•2013 jim hogan team solutions. my goals. • for you to “think

Mathematics Marches On - . chapter 7. table of contents. background. go there!. mathematics and music. go there!.

AN Augustinian Perspective on MATHEMATICS - . a dilemma. could god have created a world in which 2 + 2  4 without

K – 12 Focus on Mathematics - 1. k – 12 focus on mathematics. broaden the strategy by implicating more people in

Workshop On Interest Rate Mathematics - . i. interest rates the interest rate is the amount paid by the borrower to the