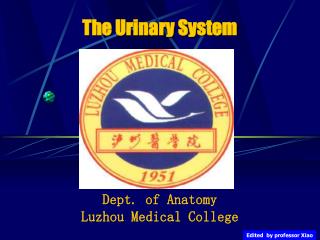 The Urinary System Dept. of Anatomy Luzhou Medical College. Edited by professor Xiao. The Urinary System. Kidneys, ureters, urinary bladder & urethra Urine flows from each kidney, down its ureter to the bladder and to the outside via the urethra Anatomy of the Urinary System - . structures. kidneys: located under back muscles, behind parietal peritoneum, above the

ANATOMY AND PHYSIOLOGY OF THE URINARY SYSTEM - . objectives. identify the main functions of the urinary system learn the

The Genito -Urinary System Medical Surgical Nursing - . outline of review . recall the anatomy and physiology of the

The Urinary System - . chapter 17. bladder schistosomes. normally, urine is sterile. presence of blood may indicate an